August 2021.  For the next couple of months we are hosting a Temporary Exhibition in our Encounters Building.  It comprises photographs of Margaret Courtney-Clarke, curated by Virginia McKenny who talks about the work below.  All images are courtesy of SMAC Gallery, and the artwork copyright rests with Margaret Courtney-Clarke.

Extract to the Foreword from “When Tears Don’t Matter”

Born and raised in Namibia Margaret Courtney-Clarke’s enthusiasm, energy and love for Namibia and those she photographs is palpable in the narratives she shares. 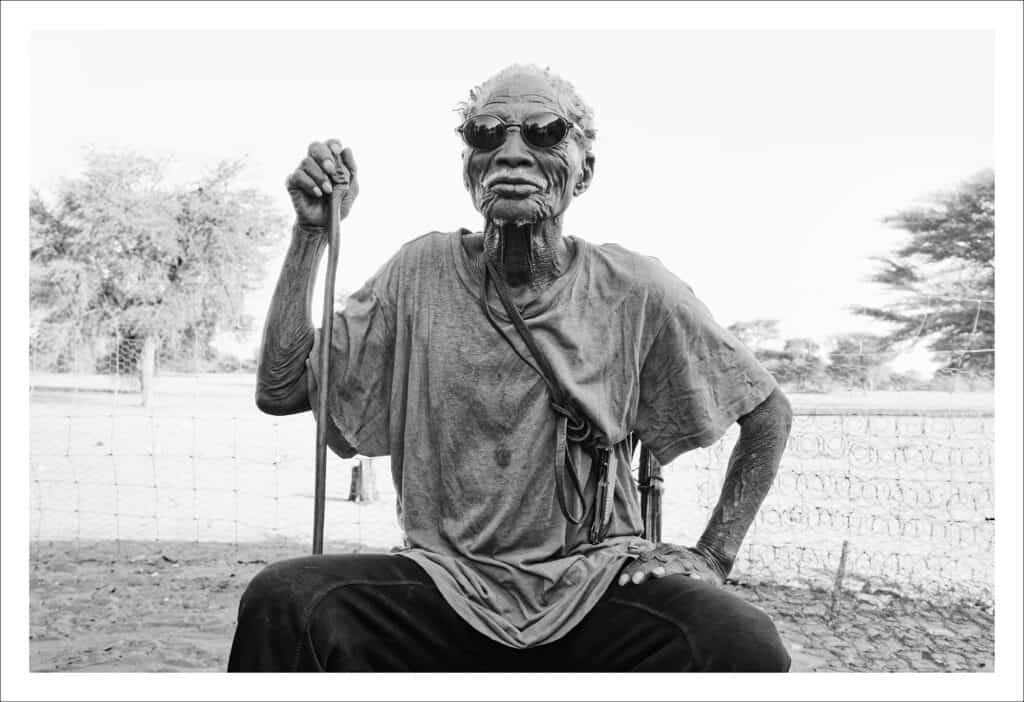 One of the few documenters of indigenous women’s artistic practice in Africa, viz Ndebele: The Art of an African Tribe (1986), African Canvas – Art of West African Women (1990) and Imazighen – the Vanishing Traditions of Berber Women (1996), she is well versed in seeking out that which exists beyond the public realm.

While men’s art in Africa during the 80s and 90s was gaining visible traction through museum shows and gallery support, women’s creative endeavour rarely made its appearance due to its close connection and literal attachment to the domestic sphere. Courtney-Clarke travelling solo to remote homesteads in South, West and North Africa understood this and made a point of photographing what could only be seen in situ.

Her latest book engages the lives of the remaining Bushmen in the Kalahari in eastern Namibia. She is interested in the people themselves, scattered Bushmen who eke out a living facing the daunting demands of the natural elements – including a seven-year drought – as well as the appalling bureaucratic neglect by a government which fails to honour its constitutional mandate to look after its peoples equally. 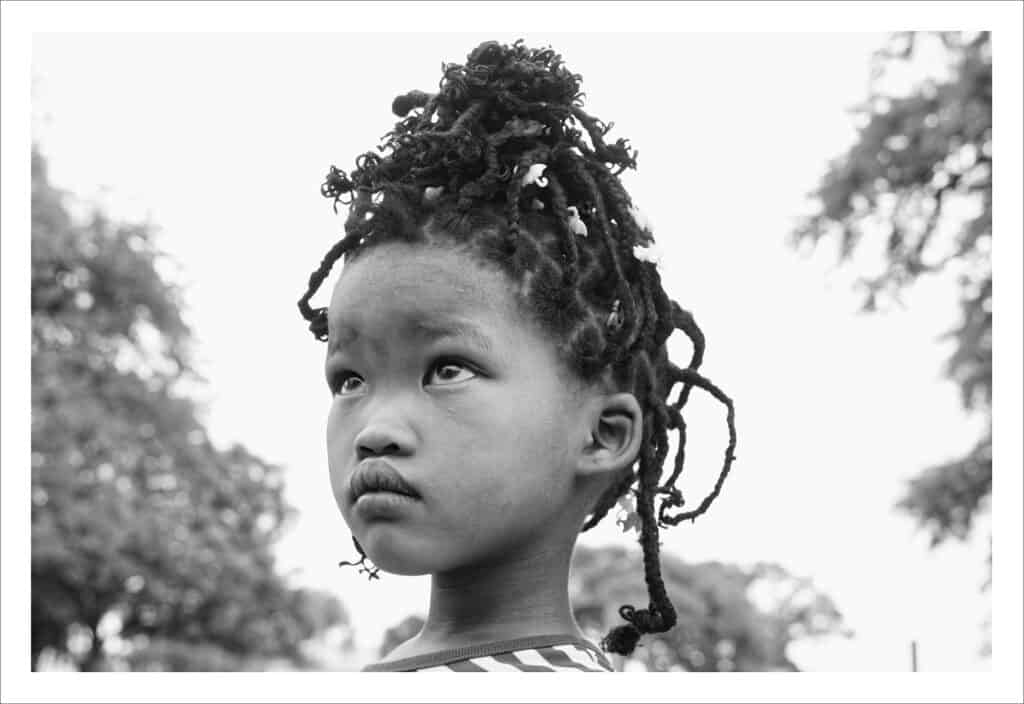 I was pulled into this journey, albeit vicariously, as, sharing interests in art and environmental resilience.

I became the recipient of many photographs produced en route that have now found their way into this work. I would receive text messages, terse indicators of the raw experience of the journey. A constant reiteration of ‘no water, no shade, no nothing.’, and the endlessness of the road ahead – “journey south will take 5 days in thick sand!”, “100s kms in 4×4 low gear bone rattling tough shit”.

The impacts of the never-ending drought came through: “our campsite at Djokhoe Nyae Nyae conservancy destroyed few days ago by elephants. It doesn’t get bleaker than this’. Her anger and sense of helplessness were palpable: “My heart cries out for these people” and later “desperately heartbreaking” – when she found “pockets of Bushmen here and there all in search of water (many boreholes down and tanks ripped open by elephants). It’s hard to stay positive”. She notes with typical directness that it’s “hard to ‘frame’ distance and space in this fuckallness”. “Re think. Re frame”. 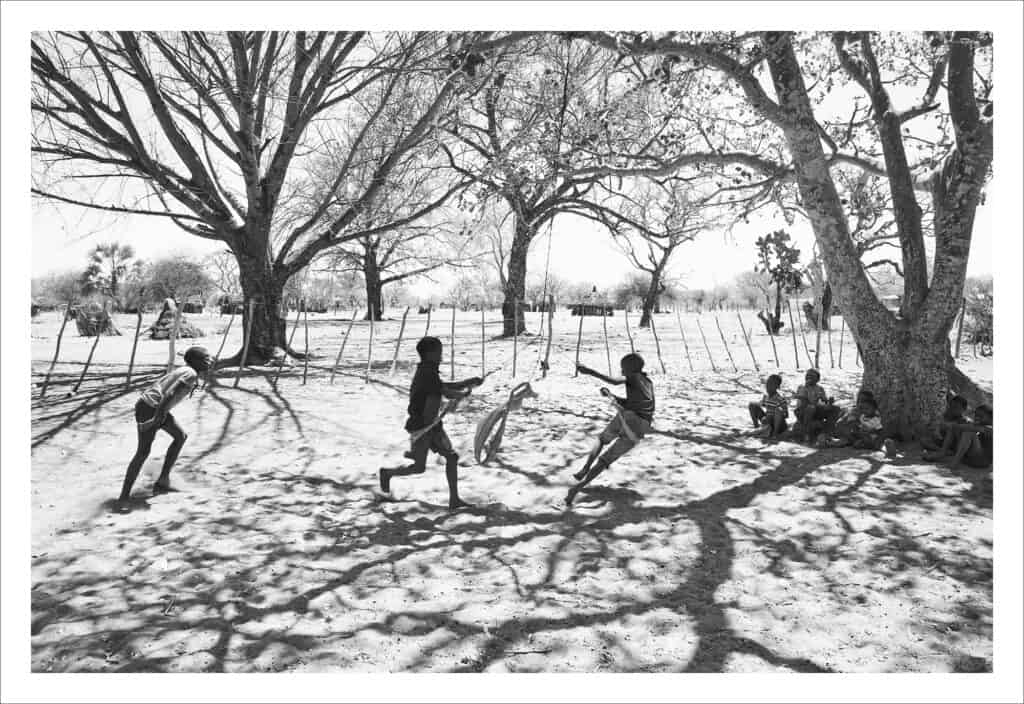 How does Courtney-Clarke manage to keep on returning?

Because of the pain, she says; “the spirit of the people keeps me going”. This is key to her work which, while recording a deprived people living on the barest of means, also reveals a resourcefulness and stamina for life. Courtney-Clarke, a veteran of the desert… seeks out the small incidents of resilience in the larger crisis of survival. 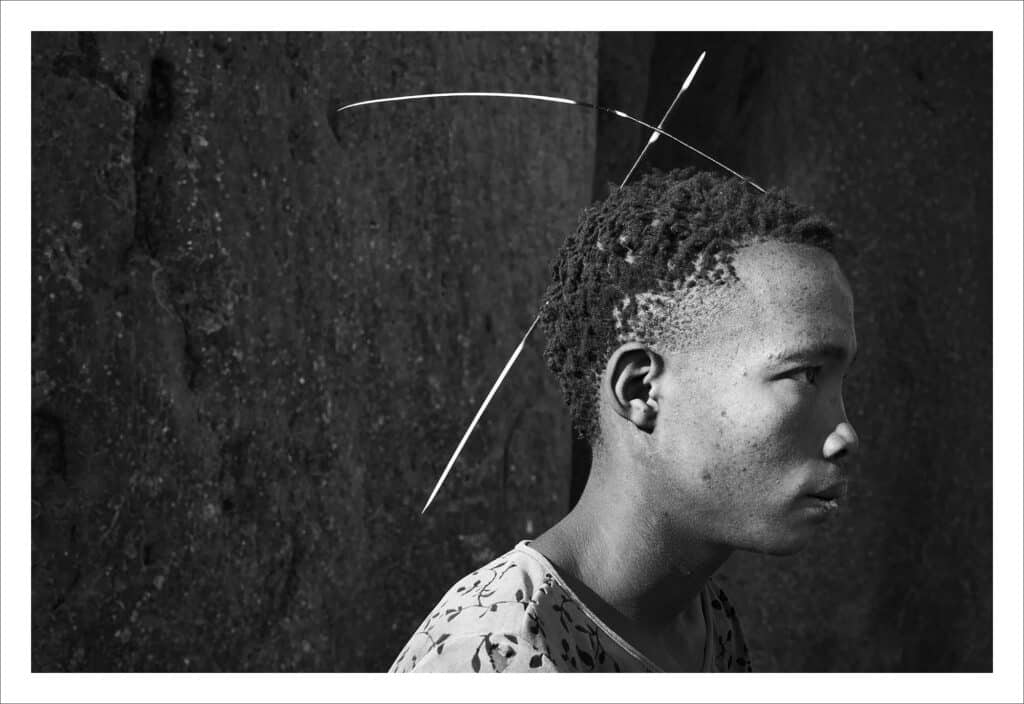 She sees not with a detached, dispassionate eye, but a profoundly personal one.

She is acutely aware of the legacy she embodies, the “baggage of childhood, apartheid… and (her) grandfather’s inability to change things ”. Given photography’s dark role as a mechanism of imperial rule one could default to a place of easy critique of [her] forays into Africa. However, Courtney-Clarke, unlike many predecessors does not ‘look at’ her subjects from a distance, but ‘walks with’ them. She feels acutely, she gets heartbroken and outraged at the inequalities she sees and in response she gets active.

Courtney-Clarke has a special eye for the experiences of women who are celebrated here in their role not only as mothers, homemakers, gatherers and nurturers, but individuals who, in later life, hold sovereign dignity as matriarchs; no less regal under their shredded canopies than queens of old. In an extraordinary series of black and white photographs, women’s deep satisfaction in the ancient pleasures of smoking is palpably evident, as is their independence of being.

This is a people caught between worlds.

Youth who still hunt porcupine, mimic the moves of city life learnt not from real experience, but from Smart phones. Young girls learning ageless rituals of rain prayers pantomime the language of the catwalk, and the enticements of shiny corrugated iron drug dens corrode traditional values. As silver shoes cross ochre sands for weddings held in churches created in honour of a foreign god, and trances occur not under the night sky, but in plastic pentacostal tents, where the barely able lead the blind, the images layer one upon the other – expanding the viewer’s sense of a people most often portrayed one-dimensionally. 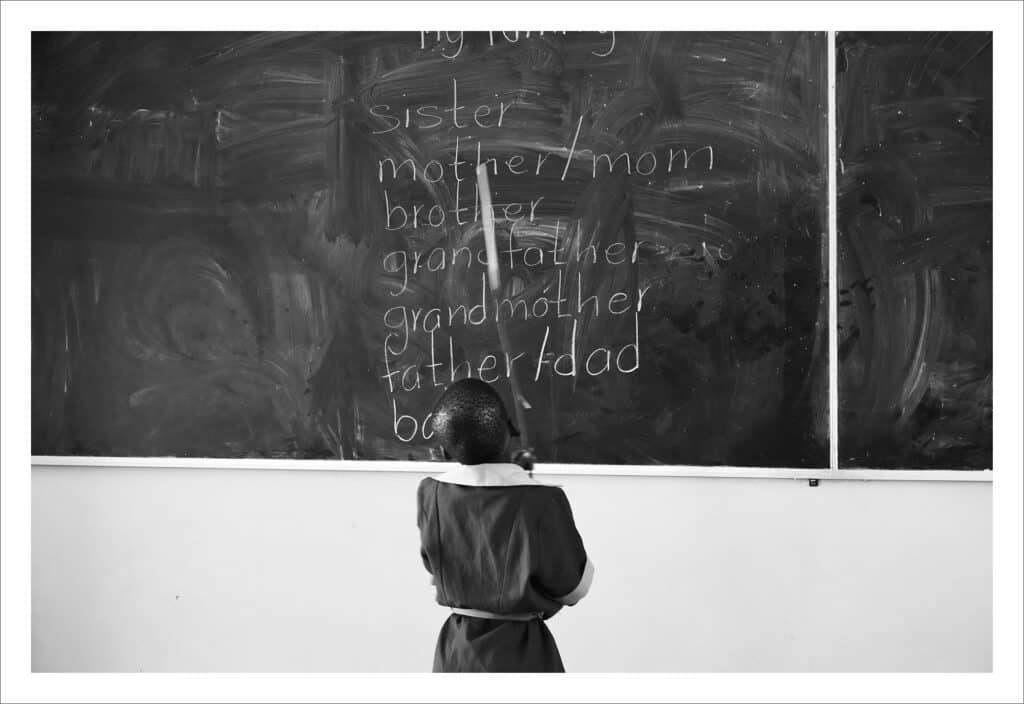 The photograph Singing the Rain is a form of praying into being.

An invocation arising from an inner spirit towards an outer manifestation. If the world pandemic of COVID has taught us anything it should be that life is tenuous. That we can expect to disappear as suddenly as we came and that we should care, for others, for community, for touch, for connection – tasks that Courtney-Clarke’s work calls for us to do.

Scroll To Top
We use cookies to ensure that we give you the best experience on our website. If you continue to use this site we will assume that you are happy with this.Ok