The San of South Africa 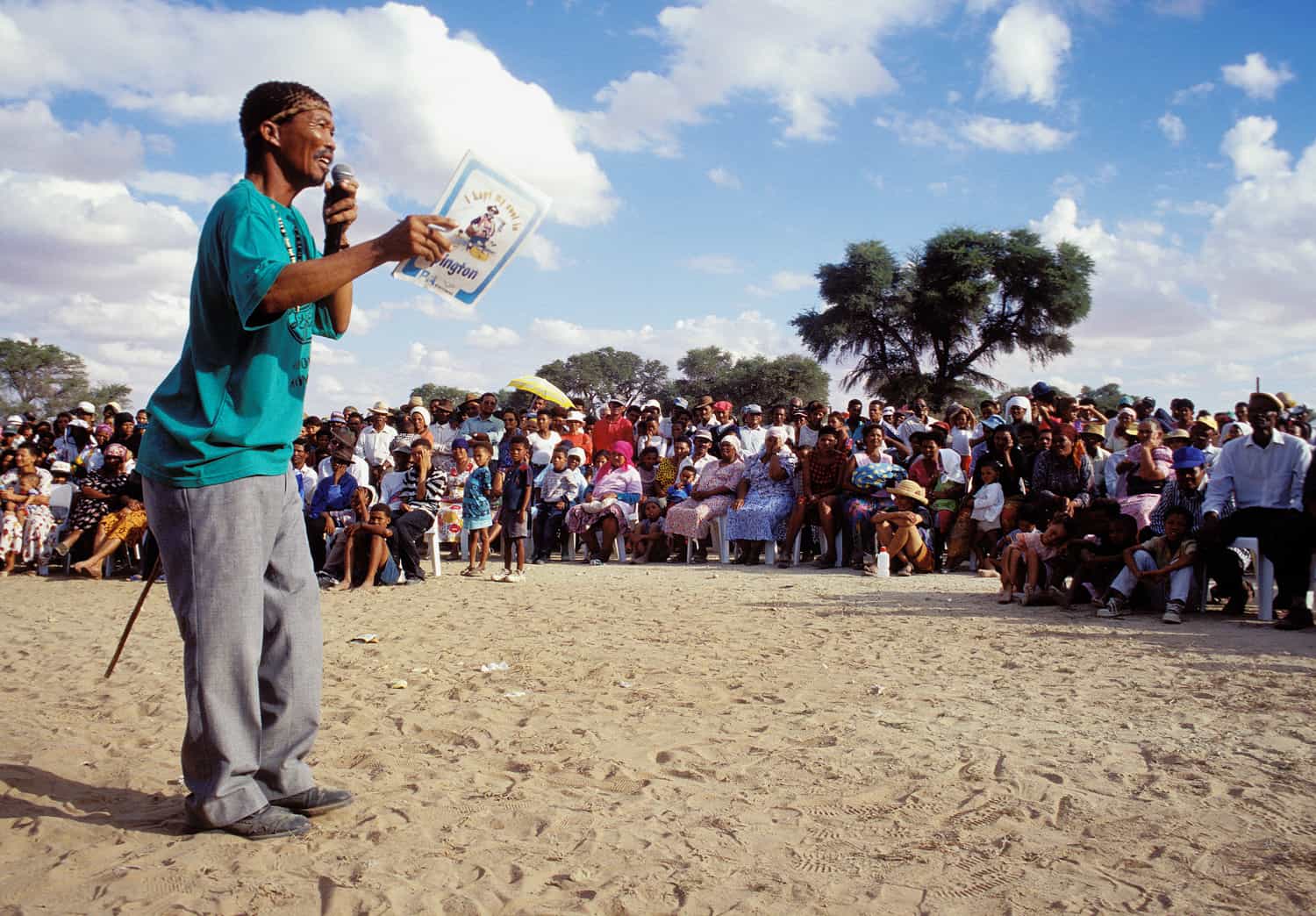 “Growing up, I was a herder looking after livestock and other people’s herds making a living. I grew up with a very deep knowledge and spirit but didn’t know what this really meant for me. I grew up with my grandfather, Regopstaan, Xalagap and the other grandfathers. They gave me an introduction into spiritual and traditional matters. So that’s where I am today – spiritual healer of my people.”

“In my understanding, in this new modern time, we’ll have to – whether you’re a Bushman or not – tune into technology, modern science, to survive. In the old times things were different. Today there are camps and laws, that time there were no camps and laws. It was just the natural law people followed then. There was lots of wildlife, lots of animals – everything was free. God blessed us, the Bushman danced, but today the Bushman doesn’t even dance any-more, because he’s trapped – it’s law-time. In the change that’s been made, you have to learn for yourself to adapt." 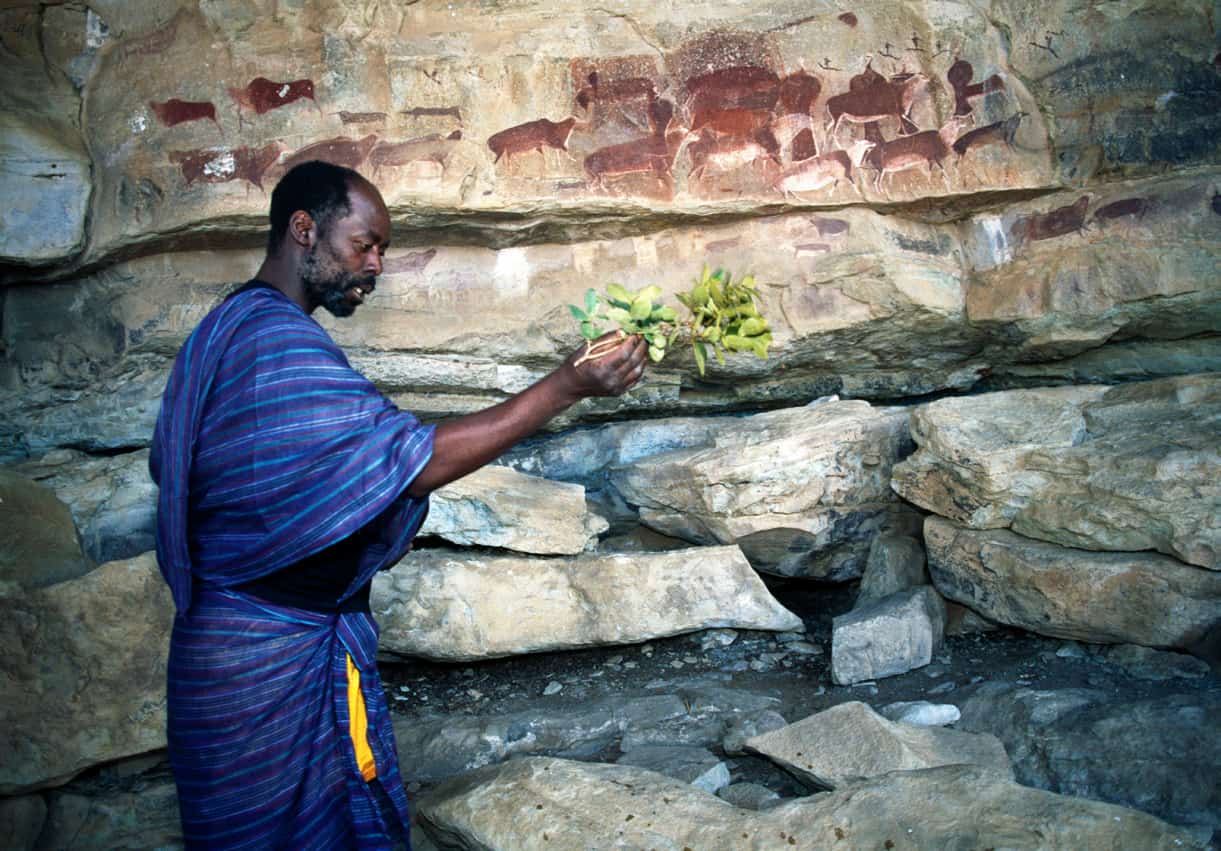 Richard Duma practices a ritual at a rock engraving Kamberg, Drakensberg, South Africa. The Abatwa of the Drakensberg were thought to have been wiped out in the late 19th century.

The revival of San identity in the 1990s disrupted the image of San as a Kalahari hunter-gatherer stereotype. This led to a more complex reading of South African history, one that includes the history of genocide and assimilation and that recognizes the relationships the San forged with those who encroached on their land. The San presence articulated by San descendants validates their contribution to the formation of South African cultures, contrary to the one-dimensional portrayal of San as a group of people who simply became ‘extinct’ and ‘disappeared’. 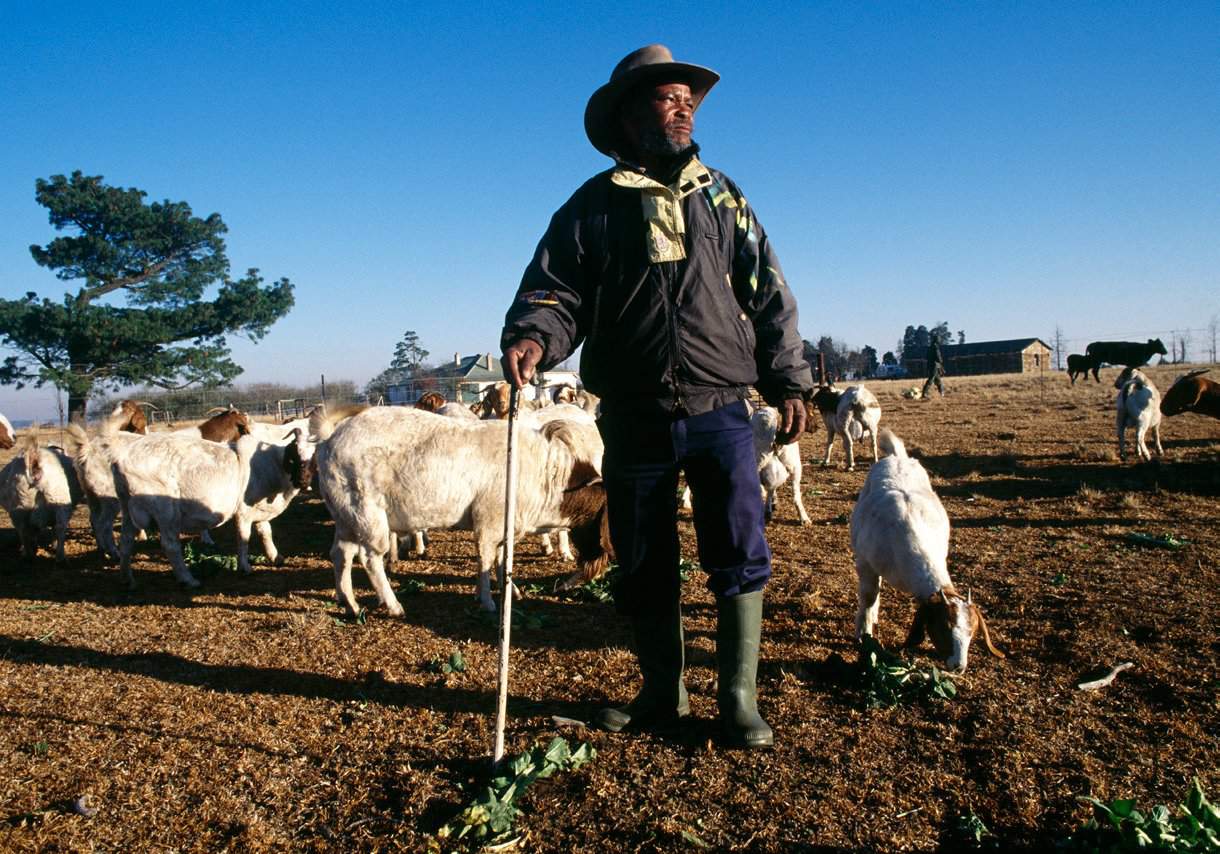 Descendants of the ||Xegwi San from the Drakensberg, who live in Chrisiesmeer, Limpopo also once believed to have become extinct.

Through much of the 20th century the prevailing academic position about San of South Africa was that we were ‘extinct’, having been ‘wiped out’.

People growing up in South Africa lived with a mythological presence of ‘the Bushmen’. They learnt about ‘the San’ at school as an integral part of the country’s history.

In the popular imagination, San were everywhere. The popularisation of The Gods Must Be Crazy films, advertisements and commercially branded items, all created the impression that ‘Bushmen’ were part of South Africa’s national DNA but elusively absent at the same time. ‘Bushmen’ were presented as a unified people who lived in a Stone Age time warp and in ‘primitive affluence’.

Various myths circulated. Bushmen were ‘children of nature’, a culture that continued to hunt and gather and live in harmony with nature. San were a chimera South Africans chased in search of the country’s authentic and romantic past.

All that remained, it seemed, were San rock paintings, engravings and various dioramas in museums.

The narrative that very few people would listen to or accept was of the various phases of genocide, dispossession and assimilation that had been inflicted on the San.

By 1994, South Africa’s San re-emerged. The ǂKhomani of the Northern Cape regained their voice and made a successful land claim.

Added to this population were about 4000 !Xun and Khwe former San soldiers who arrived in South Africa shortly after Namibia’s independence and eventually settled in Platfontein near Kimberley.

“It has been very difficult to adapt to this new way of life. My artwork is the knowledge I carry in my mind from my previous life." 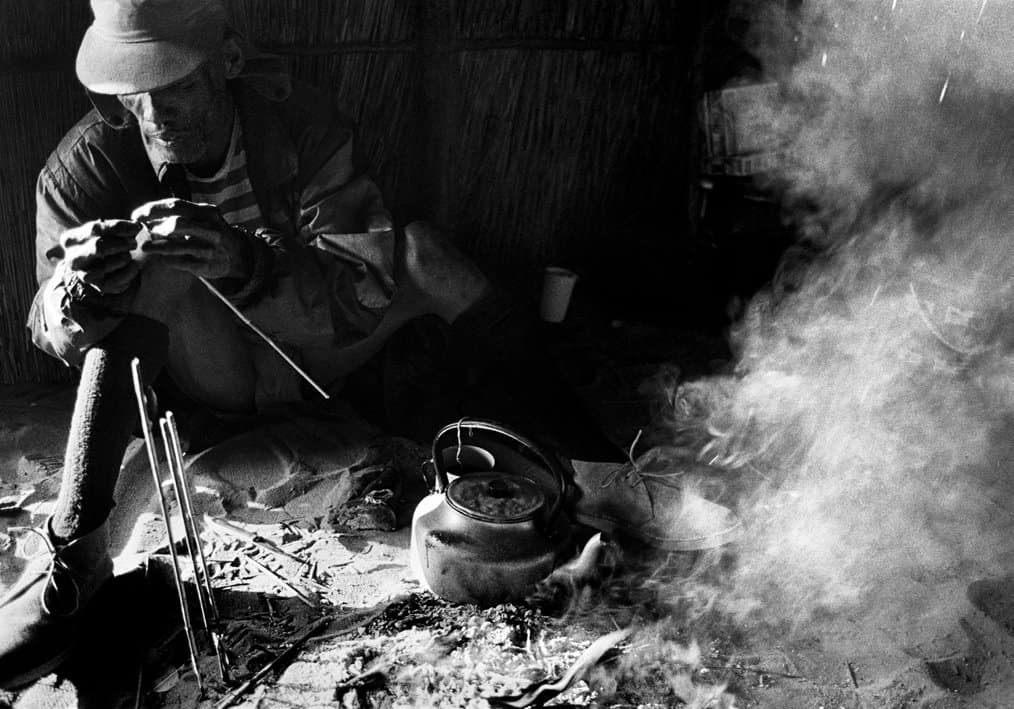 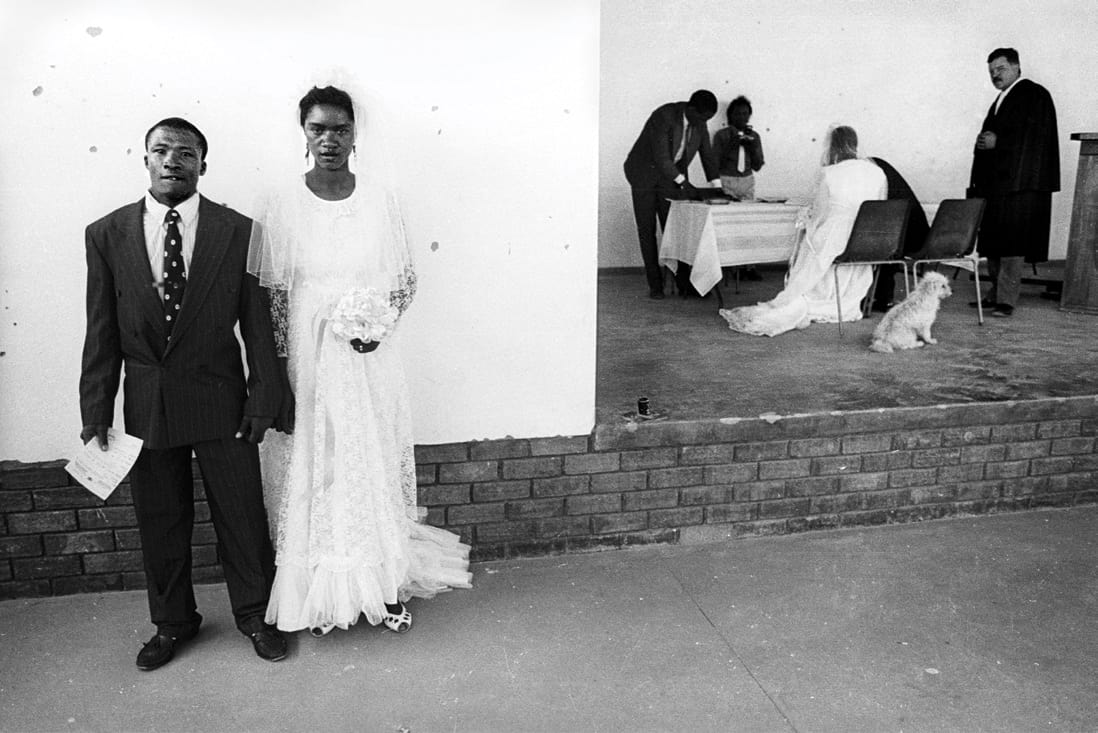 After Namibia’s independence, former South African Defense Force (SADF) soldiers and their families were relocated to Schmidtsdrift and then Platfontein near Kimberley.

Upon Namibia’s independence, the SADF feared reprisals from the new SWAPO-dominated government.

While the army provided tents, water, schooling, shops and a dwindling number of jobs, life was hard for these new inhabitants.

In addition to profound social problems like alcoholism, prostitution and violence, relocated women became dependent on men. For members of the older generation, hunting and gathering were a dim memory.

Life in Schmidstdrift was, as Steven Robins described, “shaped by a hierarchical military culture as was the case at Omega base”.

An art project was established and produced many artists who gained international recognition and a new form of income.

Dawid Kruiper, an important leader of the ǂKhomani community during the time of the land claim. 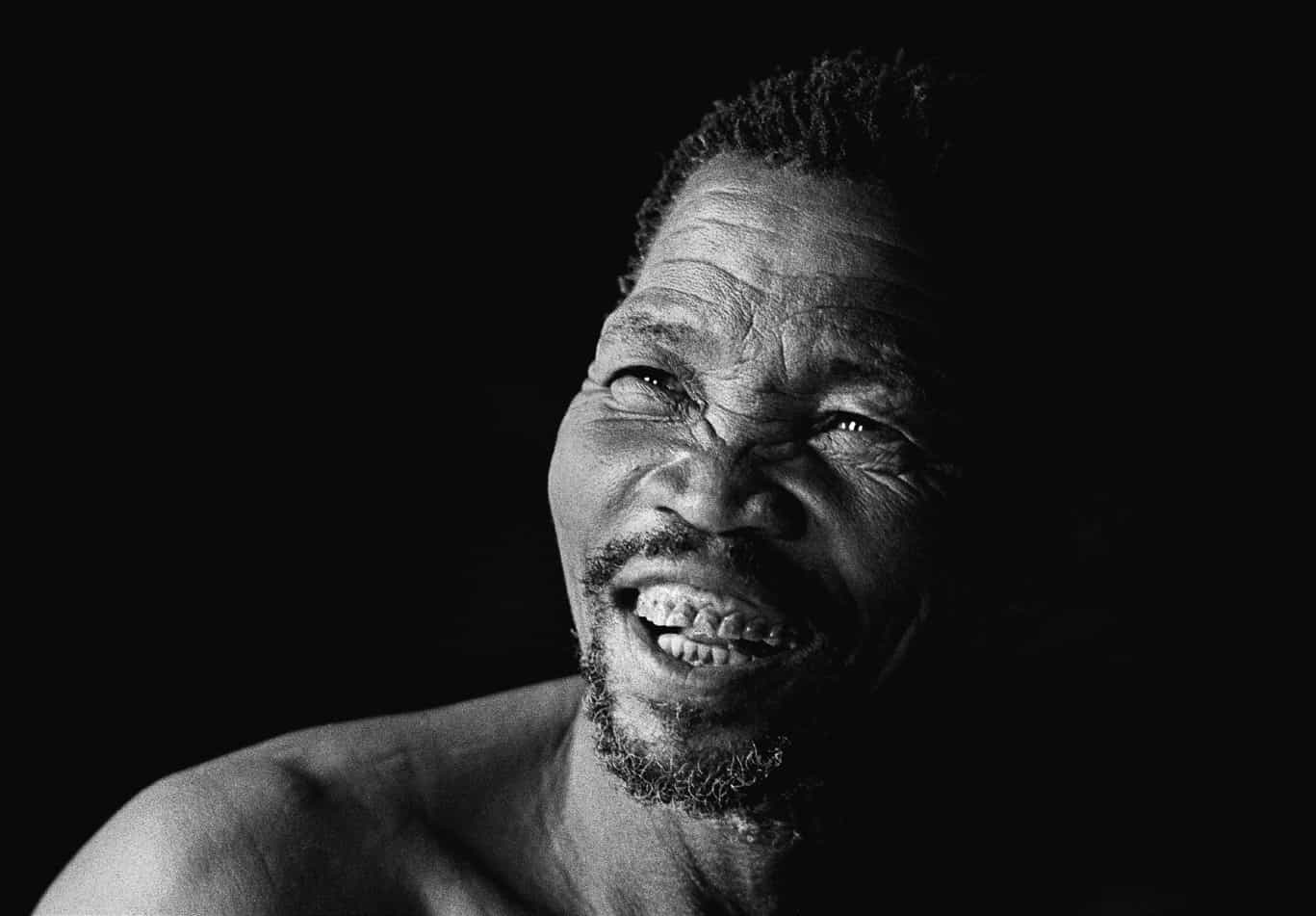 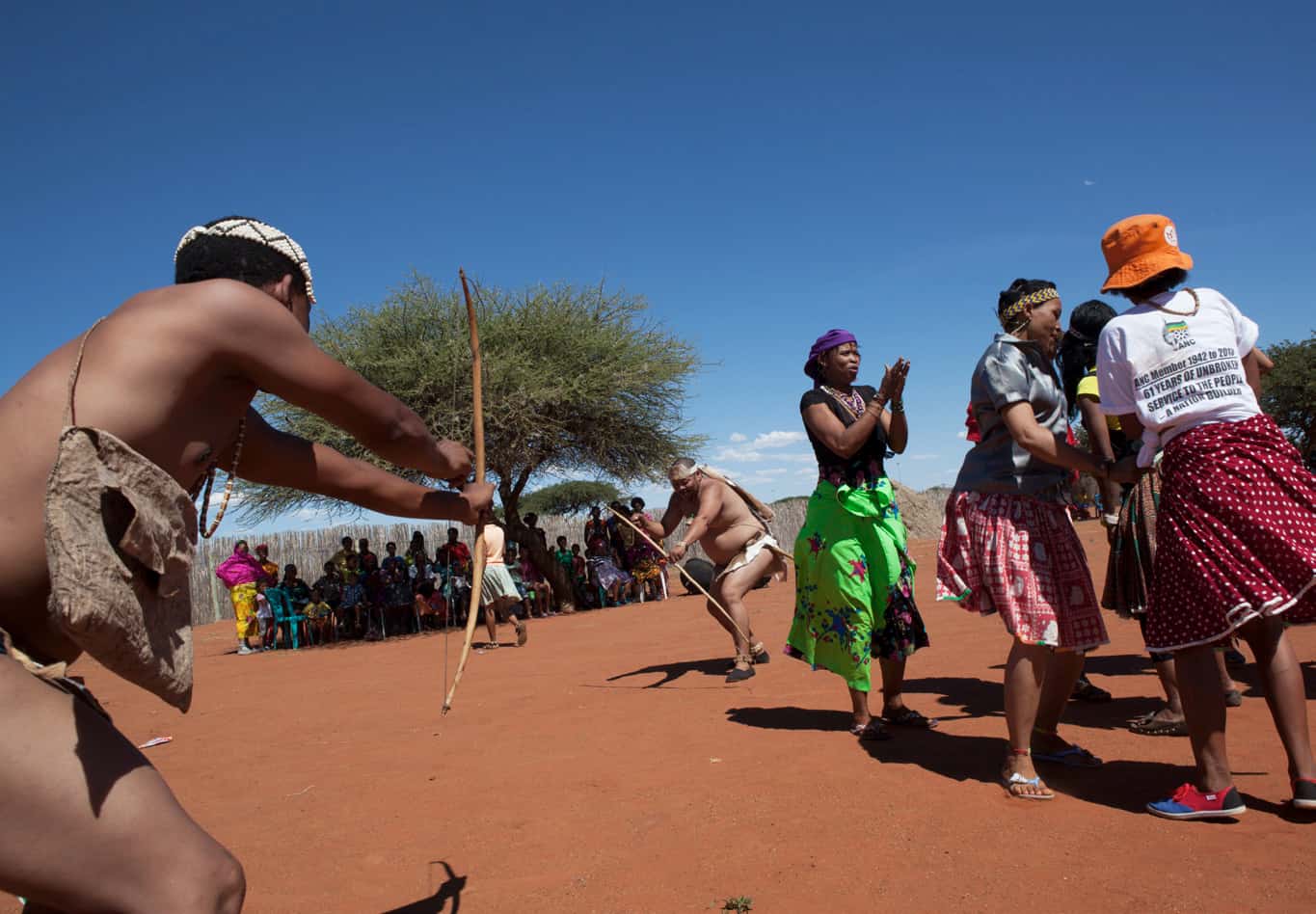 A Thai crew working on a TV commercial, Welkom 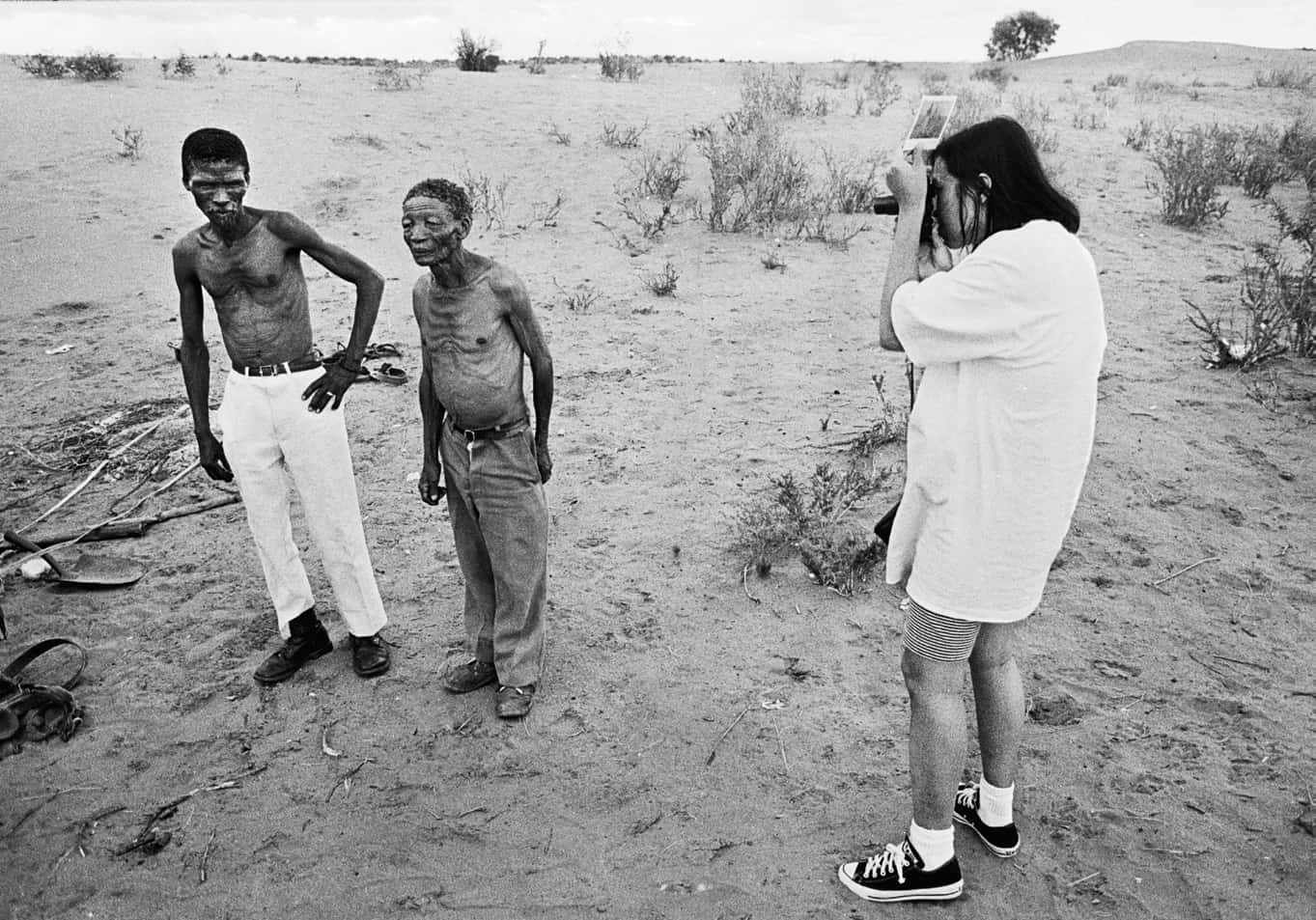 Scroll To Top
We use cookies to ensure that we give you the best experience on our website. If you continue to use this site we will assume that you are happy with this.Ok